Man sets himself on fire to propose his girlfriend - shocking news 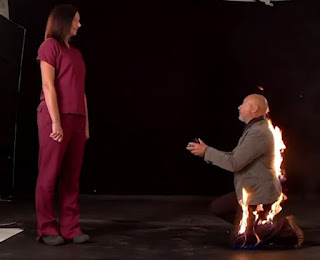 Some wise man once said, "Reason was never admitted into the court of love". Love is perhaps the most amazing feeling of human life. Love takes a man from eternity to a surreal world. A man who falls in love always tries to devise special ways to impress his beloved. Sometimes people resort to trickier and weird ways to propose his dearest.
A lover invents such a sensational technique that he dared to set himself on fire while proposing to his girlfriend. You probably have never seen or heard like this incident ever before. A lover who hails from Britain has set himself on fire and then proposed his girlfriend in presence of many people.
This mighty heart lover is Riky Ash who went before his girlfriend Katrina Dobson and asked her for marriage with fire on his body. This dangerous act has become viral on social media.
Riky Ash is a famous stuntman who invented this unique way to propose his fiancee. After setting himself on fire, Riky knelt down before Katrina and then asked her for marriage.
This is highly important to note that every security arrangement was made available there to avoid any unwanted situation. His crew was present on the spot along with fire extinguishers. As soon as Riky had done proposing his girlfriend, the crew members immediately extinguished the fire from Riky's body.
Riky later said that he wanted to propose Katrina in a way which was never seen before. He first worked out his plan on paper, talked with his crew and made all security arrangements. Only then he expressed his love to his fiancee.