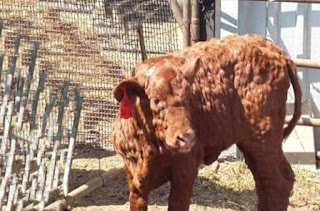 Infectious disease of cattle has taken a pace and is evolving like another pandemic in Chhattisgarh, Madhya pradesh. This viral disease is known as Lumpy Skin Disease which generally attacks the livestock. About a year ago this viral disease was found in Odisha which infected a large number of cattle.
This lumpy skin virus belongs to the family of Poxviridae having Capripoxvirus as genus. Reportedly, around 109 villages of Madhya Pradesh have been affected by this cattle disease. This virus causes lumps on the skin and swelling on the joints of the cattle. The skin lumps of the cattle later turns into sores with high fever and eventually the cattle dies.
Veterinary Scientists have said that this virus spreads from cattle to cattle and is not a threat for humans. However, cattle with stronger immune can defeat this virus.

According to the veterinary doctors, high fever and formation of skin lumps(especially on the head, neck and reproductive organs) are main symptoms of this disease. Flies can be very dangerous for spreading of the disease. The infected cattle starts to produce less milk with loss of appetite. Eyes and nose become runny and also there will be  shortness of  breathe. After 10 to 15 days of infection the cattle dies.

Cows of Madhya Pradesh are infected

In Anuppur district of Madhya Pradesh, more than 1500 cows have shown the symptoms of lumpy skin virus. Dr. P.K. Solanki, a scientist of Veterinary department of Madhya Pradesh has conducted a survey in the affected region. And according to the survey, the lumpy skin virus is present in the cows. Skin lumps of various sizes have been found on the cows. Body temperature of the cows are recorded at 104 to 105 degrees which is quite high. It is now feared that the dangerous virus may soon spread to other states like Bihar, Uttar Pradesh, Punjab and Haryana.

Instruction for maintaining physical distance amongst the cattle

In India, the veterinary doctors identified the lumpy skin virus for the first time in Odisha last year. The virus spreads from cattle to cattle, hence herdsmen (a man who keeps and cares livestock) have been advised to maintain physical distance amongst their livestock to stop spreading of the life risking disease.

Lumpy Skin Virus has no vaccine

As of now, there is no any vaccine to combat with the lumpy skin virus. Treatment is being provided based on the symptoms. Infected cattle are being provided antibiotics, pain killers and vitamins as medical treatment.