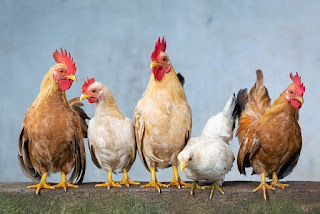 China has just claimed that frozen chicken wings imported from Brazil contains deadly corona virus. In the last week it was reported that Sea fish Jhinga imported from Equador were also found to be contaminated.
China stopped importing meats from Brazil and some other countries in the month of June. However, later on, the ban was withdrawn in anticipation that the pandemic was in control.
During their regular examination, Local Disease Control Center (CDC) of Shenzhen City collected samples of chickens which were imported from Brazil. Report came positive when the chicken samples were tested in laboratory. Officials have reported on Thursday that products and people who were in close contact with the chickens have also been examined but their report came as negative. Brazil is yet to react on the matter as of now.
Shenzhen CDC has appealed it's citizens to take sufficient safety measures while consuming any food products imported from other countries. It is to be noted that, Shinfedi Sea Food Market of Beijing (Capital of China) was found to be contaminated in the month of June. Right after this incident the Chinese Government started to collect samples of all food products for Covid-19 test.
It was feared that the infection originated from the Sea Food Market of Wuhan City, China. This sea food market of Wuhan is known for selling meats of Bat, Snake and many other weird animals. Under the tremendous pressure of international controversy, China has banned selling and purchase of many animals in this food market.
Another news has surfaced from China which will surely raise the adrenaline level of readers. Two people who recovered from Covid-19 months ago have been found positive yet again. One female aged 68 years of Huawei city was diagnosed with novel corona virus in the month of December has been found positive again on last Sunday. The second case is from Shanghai where a man found to be positive in April has been tested positive again on last Monday. However, the patient has appeared to be asymptomatic.
The local administrations have said that all those people who got in contact with the two patients have been tested negative. However, they have quarantined both the patients to avoid any kind of risk.
Recent studies have claimed that antibodies developed in the recovered patients are decreasing rapidly within few months. That means, the antibodies of recovered patients tend to reduce over time which makes the same patients vulnerable again. Although, cases where a same person is found to be Covid-19  positive twice are very dismal.