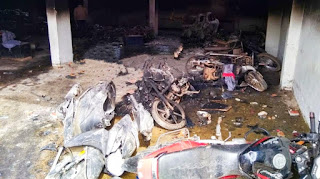 On Tuesday night violence broke out in DJ Halli, East Bengaluru over an objectionable facebook post. To disperse the violent mob and to take the situation under control, police used lathi-charge, tear gas and also opened fire. Reportedly 3 people have died on police firing and 60 policeman have suffered injury. The Police Commissioner of Bengaluru, Kamal Pant shared this information with media.
The incident took place in DJ Halli area of east Bangaluru. Curfew has been imposed in DJ Halli, KG Halli and Kavalbyrasandra ares till Thursday. Also section 144 has been invoked in entire Bangaluru. The Bengaluru Police Commissioner has said that the situation is now under control and they have arrested the accused P. Naveen who allegedly shared a communal post in facebook last night. CP Kamal Pant has appealed to all concerned for maintaining peace and let the law take it's own course.
Police have also arrested 110 other people who were involved in the violence. Naveen is known to be a nephew of congress MLA Akhanda Srinivasa Murthy who allegedly made derogatory remarks on the Prophet Muhammad. This communal post triggered immediate unrest in Pulikeshi city of Bengaluru and a large mob gathered in front of the Congress MLA's house and the DJ Halli police station.
The violent mob pelted stones and set ablaze 25 vehicles and also set fire on 200 motorcycles parked at the police station. The mob also vandalised the houes of the congress MLA Srinivasa Murthy as because Naveen who shared the communal post happens to be close relative of the MLA. Police finally opened fire to disperse the violent mob which killed 3 people, the incident also caused injury to 60 policeman who were subjected to attack by the large mob.
Bangaluru police have also arrested one Muzamil Pasha a leader of Social Democratic Party of India (SDPI) who has been charged for instigating the violence.
Karnataka CM BS Yediyurappa has condemned the incident and has said that the perpetrators will be punished as per law, his Government has zero tolerance for such acts. He further said that such attack on anybody, be it property, journalists, police or public is highly unacceptable. Strict action will also be taken against the person who shared the communal post on social media.
The property of the perpetrators who vandalized public property should be confiscated to recover the huge loss, demanded by Vasudev Sunil Kumar, BJP MLA of Karkala constituency.
Basavaraj Somappa Bommai the Home Minister of Karnataka has warned the conspirators for strict consequences for their illegal act as he has allowed a free hand to the police department.