Reality Check - Babri Hospital at Ayodhya by Sunni Waqf Board 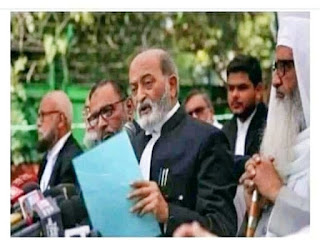 It is being claimed on social media that the Sunni Waqf Board is going to construct Babri Hospital on the 5 acre plot of land at Ayodhya. Scrutiny of records has revealed the reality.
The 5 acre plot of land at Ayodhya has been allotted to the Sunni Waqf Board subsequent to the judgement passed by the Supreme Court of India in November 2019.
Messages have been made viral on the social media that the Sunni Waqf Board is going to construct a hospital on the allotted plot of land at Ayodhya and will name it after Babar. It is further claimed that Dr. Kafeel Khan will be the Director of this hospital.
Who is Dr. Kafeel Khan?
Dr. Kafeel Khan was a lecturer at the Paediatrics Department, Baba Raghav Das Medical College, Gorakhpur. He obtained his degree of MBBS and MD (Paediatrics) from Kasturba Medical College, Manipal, Karnataka. The Special Task Force (STF) formed by the UP Police arrested Kafeel Khan from Mumbai on 13 December 2019. Khan was alleged with giving hate speech at the Aligarh Muslim University during the anti-CAA (Citizenship Amendment Act) protest. An Aligarh Court granted him bail on 10 February 2020 but was arrested again by imposing the National Security Act (NSA) on 13 February 2020. Currently Dr. Khan is detained in Mathura Jail.
A photograph has also been made viral along with the claim wherein Indian Scientist and Social Activist Gauhar Raza can be seen standing with some lawyers.
Narendra Modi, the Prime Minister of India has founded the stone laying ceremony of the Ram Mandir on 5 August 2020. It is pertinent to mention that the Supreme Court of India vide it's judgement dated 9 November 2019 allowed to construct Ram Mandir on the disputed plot of land. The Apex Court also ordered the Government to allot a plot of land measuring 5 acre at Ayodha to construct a Masjid. Accordingly, the Yogi Government of Uttar Pradesh has allotted 5 acre land to Sunni Waqf Board at Dhannipur Village of Ayodhya.
Several fake news have already been circulated on social media regarding the proposed Ram Mandir. Now, rumours about the land allotted to Waqf Board are also being shared on Facebook, twitter and whatsapp.
The message which is being shared along with the photograph is like below.
Sunni Waqf Board has decided to construct Babri Hospital on the allotted plot of land which will provide free health services like AIIMS. Dr. Kafeel Khan will be the Director of this hospital. One floor of the hospital will be kept as reserved for children where Viral Meningitis and other diseases will be treated.
Reality Check
As per Hindustan Time's report the Uttar Pradesh Waqf Board has constituted a Trust for construction of Mosque over the 5 acre allotted plot of land. The Trust has started to construct it's office on the said land in the name of Indo-Islamic Cultural Foundation Trust. Along with Mosque, one library and hospital will also be constructed but no name like Babri Hospital etc. has been mentioned in this report.
As per New Indian Express report, Secretary of the Trust, Athar Hussain has said that besides Mosque, a library, a hospital and one community kitchen have been proposed to construct on the 5 acre land. It is also reported that Yogi Adityanath will be invited for laying the foundation stone of this project.
Reaction of the concerned Waqf Board
The Sunni Waqf Board has termed all these claims as baseless and exaggerated. The Board has made it very clear that so far no such construction plan has been proposed and it is yet to be finalized what they are to do with the allotted land.
Chief Executive Officer of Sunni Waqf Board, Uttar Pradesh, Syed Mohammad Shoeb has confirmed that all the above-mentioned facts are completely fake. He has also said that the Board will initiate legal action against those who are involved in spreading the fake messages and making them viral on social media.
The UP Sunni Waqf Board has recently formed a trust named Indo-Islamic Cultural Foundation Trust with 15 members. The members of this trust will convene a meeting soon to discuss on the proposals and will finalize the plan to be carried out on the allotted land.