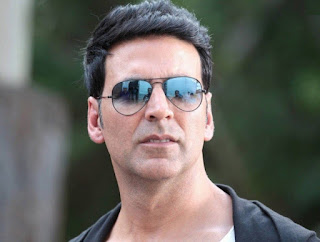 Popular Bollywood actor Akshay Kumar is known for his spontaneous help in emergency situations. Be his donation to PM CARES Fund for corona pandemic or his generous attempts to help the corona warriors, Akshay Kumar is always ahead of others. In any calamity, this charismatic actor always stands by the affected people and offers his helping hand. Akshay Kumar is a Padma Shree awardee of year 2009 and has also been awarded with the best actor in the National Film Award 2017 for his exemplary performance in the Bollywood movie Rustom.
Assam is a state which is struggling with flood every year since last 70 years. Flood caused by the mighty river Brahmaputra results in loss of lives of both human and animals including huge damages to property and crops. This year Assam has witnessed the most devastating flood ever since Independence. Nearly 30 districts of Assam out of 34 have been hit by the flood where a huge number of 54 lakh people have been affected and around 80 deaths of human life have been reported.
Akshay Kumar has donated a sum of Rs. 1 crore to the Chief Minister's Relief Fund (Assam) so as to provide relief to the flood affected people of Assam. This has been reported in a tweet by none other than the Chief Minister of Assam, Sarbananda Sonowal. Sonowal in his tweet has thanked the actor for his contribution towards the flood affected people of Assam. 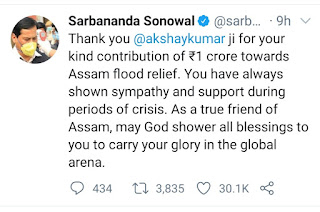