By Subhrapratim Deysarkar July 06, 2020
A shocking incident took place in the intervening night of 2nd and 3rd July 2020 which took away lives of 8 police personnel of Uttar Pradesh. Vikash Dubey a notorious criminal of Kanpur is the prime accused of this heinous killing. 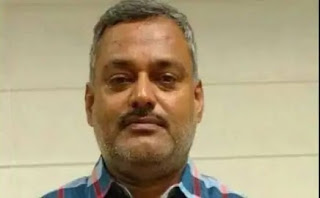 The incident took place in Bikru village of Kanpur which is around 150 Km away from Lucknow, the Capital of Uttar Pradesh.
The deceased who were brutally killed in the mishap are DSP Devendra Kumar Mishra, C.O. Bilhaur Police Station, Station Head S.I. Mahesh Yadav, Officer-in-charge S.I Anup Kumar, S.I. Nebulal and 4 constables namely Sultan Singh, Rahul, Jitendra and Bablu.
Post mortem report revealed that DSP Devendra Mishra was shot 5 bullets in his chest, stomach and right leg. During the mishap, DSP Mishra was dragged inside the house of Prem Prakash Pandey and then shot dead.
Pandey happens to be a close aide of Vikash Dubey. Prem Prakash Pandey and another were also killed in crossfire.
As per media reports notorious criminal and a dreaded Gangster Vikash Dubey is the mastermind behind the orchestration of this reverse encounter.

How the unfortunate event took place

One local resident of Bikru village namely Rahul Tiwari went to Chaubepur police station to file an FIR against Vikash Dubey a few days ago. But the Officer-in-charge Vinay Tiwari refused to file FIR and instead suggested Rahul to mitigate the matter in Panchayat.
On the day of 2nd July 2020 Rahul Tiwari was badly beaten by Vikash Dubey and his associates while Rahul was on his way to home.
Vikash Dubey known for his illegal land acquisition was trying to acquire a plot of land measuring 8 bighas from Rahul Tiwari forcibly. Rahul did not bow down before Vikash Dubey's threats and he tried to take help of the law but unfortunately he was taken aback.
Rahul Tiwari then appeared before C.O. Devendra Mishra, DSP who registered the first information report against Vikash Dubey on the same day of 2nd July 2020.
Mishra then communicated the entire matter to Sr. SSP of Kanpur and obtained his permission to raid Vikash Dubey's house to apprehend him.
Accordingly, a plan was devised to arrest Vikash Dubey in the night of 2nd July 2020. It is to be noted that a huge number of 60 criminal cases were already registered against the notorious Vikash Dubey.
Dubey was charged with several serious crimes like murder, decoity, kidnapping for ransom, illegal land grabbing, extortion and criminal intimidation.
The charges against him were framed during the period from early Nineties to 2020. Strangely enough a criminal like Vikash Dubey was not in the list of top 10 wanted criminals until now. It reflects his nexus with police and politicians.
The raid required more police personnel and so nearby Police stations were sought help for manpower. Finally, a team of around 30 cops of UP police set out in 6 police vans at around 11:30 pm on the fateful night.

KP Singh, Station Head of Bithur Police Station who got injured in the incident said that he was called in the late evening on the same day by S.O. Chaubepur to come at Bikru village.
When they reached on spot they found that a JCB was blocking the road. So, the entire team left their police vehicle and walked towards Vikash Dubey's house. It was around 12 o'clock and was very dark. They saw a few heads on the roof of the surrounding building and suddenly random fire was opened at them from 3 sides.
Under this sudden attack the police team got perplexed in this unexpected turn of event. K.P. Singh further states that he is still confused as to what and how it could happen as it was a secret mission.
It was a well prepared ambush on the police team where the assailants were ready with deadly firearms like AK-47 and other automatic rifles and guns.

How the raid took this unexpected turn?

It is easy to understand that Vikash Dubey must have been tipped off about the police raid well ahead in time. Call data records (CDR) of Vikash Dubey established his connection with several cops of the Uttar Pradesh Police force.
CDR revealed that a few hours before the incident he was in touch with S.O. Vinay Tiwari, one unnamed constable and one home-guard of UP police.
Unverified sources claimed that it was Chaubepur Station Head Vinay Tiwari who tipped off Vikash Dubey about the raid and a possible encounter to be carried out at night.
After this event a Special Task Force along with other 25 teams have been constituted to investigate into the matter and to arrest Vikash Dubey at the earliest.

What caused Vikash Dubey to took such a drastic step?

It is being assumed that the main intention of the police raid was to encounter Vikash Dubey who is wanted in 60 criminal cases. When Vikash Dubey was informed about the raid he warned for dire consequences to whoever is involved in the raid.
He then called all of his gang members with their arms to assemble in his home. It is estimated that they were around 60 in total and was well prepared waiting for the police team to arrive.
In his criminal career, Vikash Dubey was sent to jail many a times and every time he managed to manipulate the system to get bail. He was in jail for alleged attempt to murder of one of his cousin but was granted bail just 7 months ago.
He could have surrendered before the police or could go into a hideout. So, it is not very clear as to what actually compelled him to hatch such a devastating ambush.
It is very unnatural on the part of any gangster to attack police personnel as the nexus between criminal, police and politician is an open secret. Gangsters usually do not go into a clash with politicians or cops.
Records revealed that no other gangster in the crime history of UP killed 8 or more cops in a single attack. However there are 2 instances which might be relevant.
On 20th November 2004, Naxalites caused an attack in the Chandeli area of Varanasi and killed 17 policemen. And way back in 1981, Daku Chabiram killed 9 policemen in an area under Aligarh police station when a team of police went to arrest him.
Like the instant case of Vikash Dubey, Chabiram was also tipped off about the police move well before time and none other than the police itself was the traitor.
Having killed 8 policemen, Vikash Dubey immediately fled along with his gang members in the dark.
The entire UP police is involved in search of the most dreaded criminal of Uttar Pradesh. C.M. Yogi Adittyanath has said that no criminal will be spared and each of them will face strict consequences.
Dayashankar Agnihotri a gang member of Vikash Dubey was arrested by UP police on 5th July 2020. He confirmed that Vikash Dubey was tipped off by S.O. Vinay Tiwari of Chaubepur P.S.
Vinay Tiwari has immediately been placed under suspension and has been made an accused in the case.
Aggrieved by this gruesome killing the Kanpur administration has demolished the palace like house of Vikash Dubey by the same JCB which was used in the crime.
This demolition of property has been carried out exercising the UP Gangsters and Anti-Social Activities Prevention Act, 1986. This stringent Gangsters Act was brought in force by then Congress Government headed by Chief Minister Vir Bahadur Singh.
Till writing of this article the UP police has announced an award of Rs. 2.50 Lakh for information about the absconding criminal Vikash Dubey. They have also sealed the entire UP Borders such that Vikash Dubey can not cross UP border and hide in other nearby states.
It is anticipated that very soon Vikash Dubey will be killed in an encounter.
More about the criminal career of Vikash Dubey and his nexus with politicians will be updated soon.