10 hard puzzles which will blow your brain out 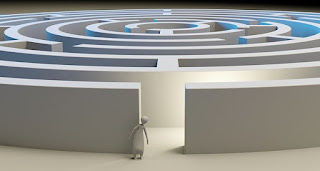 Dear readers, I have carefully selected the following puzzles from various sources. To enjoy the puzzles you will be required to possess a modest knowledge of mathematics. I can assure you that the puzzles or the brain teasers will simply blow your mind.

You can jump to specific puzzle from the below chapters:-

Solution to all puzzles

One person is standing at the door of his house and another person is walking up and down the pavement. Both of them are counting passers-by for the last one hour. Who counted more and how?

I assume, you know that December is the twelfth month of the year, don’t you? Do you know the meaning of the name? It originates from the Greek word “deka” which means “ten”. So, decalitre means ten litres, decade- ten years etc. I hope you are getting the point. December should have been the tenth month of the year but actually it’s the twelfth. How would you explain this?

There are two factory workers, one is an old man and the other is young. They both live in same place and work at the same factory. It requires the young worker 20 minutes to reach his working place on foot. Whereas the old man takes 30 minutes to walk the same distance. When will the young man see the old man if the old man starts to walk 5 minutes before the young man?

Two clerks are directed to type a report by their employer. The more expert clerk can complete the job in two hours whereas the less expert clerk can do the job in three hours. How should the employer divide the typing work between them such that the entire job can be done as early as possible?

A puzzle expert was asked how old he was. He replied, “add 3 years to my age, multiply it by 3 and then deduct three times my age three years ago, you will know my age”. Can you tell how old he was?

Solution to all puzzles

This puzzle is to be solved from the end. We know that after all transpositions, the number of matchsticks in each heap is same. Since the total number of sticks is 48, it is easy to conclude that after the final step each heap has 16 matchsticks.

Now we have the following numbers just before the last transposition:-

Further, we know that from the second heap we took as many sticks as there were in the third heap. It means 24 was double the original number. This shows us how many sticks we had in each heap after the second transpositions.

It is now clear that before the first transposition i.e. before we took as many sticks from the first heap as there were in the second heap, the number of matchstick in each heap was :-

Our calendar comes from the early Romans who, before Julius Caesar began the year in March. December was then the tenth month. When the New Year was moved to January 1, the names of the months were also shifted. Hence the difference between meaning of the names of certain months and their sequence.

It is enough to take 3 socks because two of them will always be of the same colour. But, it is not so simple with the gloves because they differ not only in colour but also because half of them are for the right hand and the rest for the left hand. So, you must take at least 21 gloves.

Since the more expert clerk can work 1 and 1/2 times faster than the other, it is clear that his share should be 1 and 1/2 times more than the other so that they can finish the work simultaneously. Hence, the expert clerk should take 3/5 of the work the other should take 2/5 the work. Now, the expert clerk can do the whole job in 2 hours, so, he will do the 3/5 work in 2 X 3/5 = 1 and 1/5 hours or 1 hour and 12 minutes. The other clerk will also finish his job of 2/5 work in the same duration. Thus, the fastest time the two of them can finish the job is 1 hour 12 minutes.

Arithmetically, the solution of this puzzle is quite complicated, but it becomes simple when we apply algebra and make an equation. Let us take x for the years. So, his age three years later will be x + 3 and three years ago will be x - 3. We thus have the following equation.

Solving this we obtain that the age of the puzzle expert is 18 years.

Now, it is said that in the end there was four times as much fluid in the first vessel as in the second, so, we shall have,