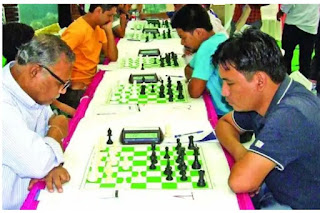 In a stunning revelation by Cachar Dist Chess Association it has come to light that Soram Rahul Singh the Reigning Assam State Chess Champion has been invited by Bangladesh Chess Federation as a guest of honor. In a letter dated 29th Oct 2019 signed by the General Secretary of BCF Rahul has been invited as a guest of honor and to play on behalf of Bashir Memorial Chess Club in the Walton 1st Division Chess League 2019 to be commenced from 12th Nov 2019 at Dhaka the Capital of Bangladesh. The letter also revealed that Bashir Memorial Chess Club will sponsor Rahul to play in this big event. Rahul in an interaction with our correspondent informed that he has already set up for Dhaka on 10th Nov. The chess fraternity of Assam especially Cachar seems to be in a state of euphoria for such an honor.
Biggest NE Online Chess Tournament
Chess